It is possible to tap into the IC-7300 after the bandpass filters, just before the ADC. There is a coax connector that allows an SDR tap to receive the filtered RX signal. It is shared with the low-level TX path, but the levels are low, giving a TX monitor too. Using CAT controls, the SDR can be controlled by the TRX. It can also operate as a second RX in the operating band. The RF tap is an alternative to the INRAD RX7300-receive antenna cable, with some advantages and disadvantages.

In an SDR-based TRX there is no IF tap point, but on the IC-7300, there is a RF tap point after the band pass filter and RF amplifier, where an SDR has the good filtering of the IC-7300, but can access the whole operating band.

The RF tap point J1431 is shown in a portion of the RF unit schematic from the service manual. The schematic shows the RX, TX and power paths in green, brown and red respectively. 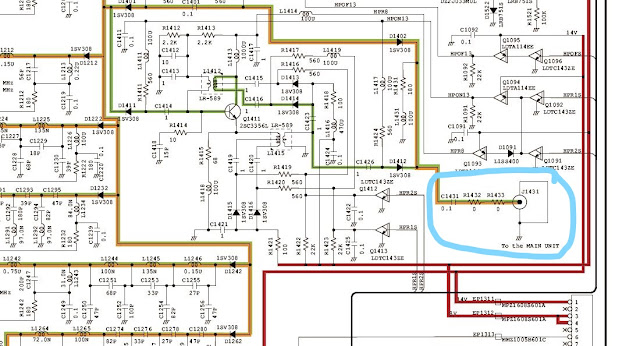 The connector on the board is clearly marked and accessible. There is plenty of room and a frw spots to tap 12 V if an isolation amplifier is used. 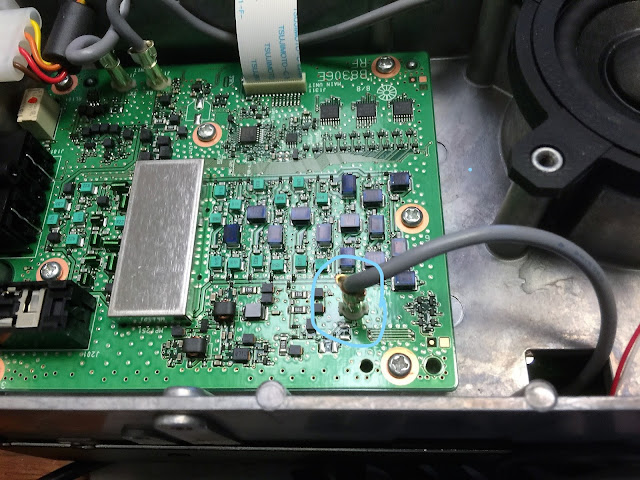 As can be seen from the schematic, the tap point is shared by both the RX and TX signal paths. However, the TX signal level is low, easily handled by a spectrum analyser of an SDR, an SDRPlay in my case. I just used an oscilloscope probe on a spectrum analyzer then the SDRPlay both working well. I forgot to take photos but will do so in due course.

I have been waiting on getting a TMP plug and socket to make a proper connection, together with an isolation amplifier, like those from Clifton labs; common for IF taps (but are no longer available). See http://vk4zxi.blogspot.com.au/2013/11/sdrs-at-first-if-of-trx-as-panadator.html

Given that the tap is shared between RF and TX, I would be interested in the views of RF engineers of any potential problems with RX and TX level controls, as the tap could affect the circuit.

The RF tap can be used in many ways:


An RF tap can be done on most TRX. I originally considered the idea for my IC-7100.

The RF tap seems pretty much the ideal way of getting a panadaptor/CAT control for the IC-7300.

The RF tap does not require modification of the TRX, given the cable connections, so it can be taken out if the TRX needs to go for service.

Like the INRAD RX7300-receive antenna cable, it requires a splitter arrangement of some sort, as both are in the direct RX line.